Recently, there's been a renewed discussion concerning cosmic horror writer H.P. Lovecraft's avowed racism and xenophobia. For those of you in the genre writing community, you know what I'm talking about. However, if you're not "in the know," here's a brief summary:

The World Fantasy Award (one of speculative fiction's premier awards) is presented to its winners as an outrageously bug-eyed bust of Lovecraft. Due to Lovecraft's fear of -- and occasional outright hatred for -- people of non-WASP persuasions, numerous writers have thoughtfully commented on the potential impropriety of using his visage as the visual representation of world fantasy. Over the past few months there's been an increased push to change the World Fantasy Award from Lovecraft's creepy maw to something less fraught with racial insensitivity -- namely, a bust of Octavia Butler, an African-American SF/F author who might more fully embody the diversity of the contemporary fantasy community. This proposal has, of course, ignited a debate over Lovecraft's place in the horror/fantasy/SF world, what constitutes an excusable personal flaw for a legendary writer, and the appropriate representation of "world fantasy."

After digesting the opinions of various writers, editors, and critics on the issue, I think a great number of people are forgetting one of the central tenets of dark speculative fiction, a tenet Lovecraft held dear: that one of the most profound and acute senses of fear is fear of the unknown. I don't excuse Lovecraft's racism and I don't condone it. One should not be exclusionary on the basis of racial, cultural, or ethnic persuasion. But the foundation for his xenophobia -- that he feared those practices and people that were foreign to him and, thus, unknown to his experience -- is a foundation for literature that we shouldn't outright dismiss. After all, a wealth of horror fiction and film, dark fantasy, and weird fiction is indebted to this same fear of the unknown.

Sure, the weird-looking extradimensional being that's stalking you might be friendly; it might want to bring you love and peace and hugs aplenty. But it also might want to use your body as a food source for its eggs or shackle you and take you to its home where it will pin you to a wall and display you like a butterfly for all eternity. Most stories of terror -- in which we don't actually see horrible things that happen, but only anticipate them, feel their borders, and guess at their nature -- operate on the "fear of the unknown" conceit. Ghost stories find foundation in fear of the unknown, as returned specters function as avatars of the death realm, which is the ultimate unknown. Ghosts are frightening because we don't know what they want, why they're here, what powers they may wield, or what it's like to be dead; they are harbingers of a void we cannot penetrate, and, thus, remains unknown and potentially threatening. Weird fiction operates on a similar principle. The outre -- all those "weird" elements beyond the normal ken of human experience -- is a source of menace because it lies at the very peripherals (or entirely off the grid) of our current understanding. When a sequence of seemingly indecipherable and inexplicable events occurs in a weird fiction tale, their cumulative effect is to instill terror and disorientation because there is no way integrate those events with our current sphere of knowledge, understanding, and experience. The "weird" of the weird tale therefore resides in the vast fog of the unknown.

The bold move Lovecraft made was to apply this fear of the unknown to people, and herein lies the problem. It isn't that Lovecraft was wrong in saying people are potentially threatening unknowns. Certainly, they are. Anyone could be thinking or doing or hiding anything at any time. We cannot know what is going in inside another person. Hence, every individual is an endlessly deep well of the threatening unknown. Everyone is potentially a terrifying cultist, ushering in the destruction of humanity; everyone is potentially a psychopathic genetic throwback, just waiting to crush your skull and eat your brain. The problem -- the big problem -- with Lovecraft is that he relegates this "unknownness" to specific racial, ethnic, and cultural groups rather than recognizing that it exists in every single person on earth. Someone like Thomas Ligotti is entirely closer to expressing this all-pervasive fear of the unknown in other people than Lovecraft ever was. So what does that mean? It means that, yes, Lovecraft was a racist and we can dislike the guy for it even as we adore other overarching ideas within his work. Lovecraft knew horror and terror and literature, and he made a move to internalize within the human form the "unknownness" that fuels a sizable portion of those aforementioned fields. It's truly unfortunate that he couldn't see past the bigotry of his time and place to make that "unknownness" more complete and less racially motivated than he did.

That said, the World Fantasy Award is supposed to represent all fantasy, from all racial, ethnic, and cultural backgrounds. Lovecraft wasn't willing to take that step in his own fiction -- to own up to the notion that maybe, just maybe, his glorious white New Englander brethren might also be monsters and write the whole of humanity as one seething mass of untold horrors. So he doesn't fit the parameters the award is supposed to represent. Lovecraft's gotta go.

That doesn't mean Octavia Butler should be the replacement, though. I admire her Bloodchild and Other Stories, but she doesn't represent the holistic nature of "world fantasy," either. No one person does. In the same way Lovecraft couldn't see the whole of humanity as horrifying "others," no individual author can fully encompass in their oeuvre the sense of "everything" that makes up the fantastical. Thus it's impossible for an individual to embody the principles of "allness" and totality concomitant with world fantasy without beginning to venture into the territory of religious semiology. Any one author picked to be the (quite literal) "head" of fantasy would be merely a popular choice based on prevailing cultural and political climate. The WFA would be far better served to do away with notions of authors as avatars of fantasy and focus on images from fantasy. For instance, I've thought that a group of multiracial children holding hands and gleefully dancing around some sort of amorphous, looming presence would be a perfect statuette. Something like this 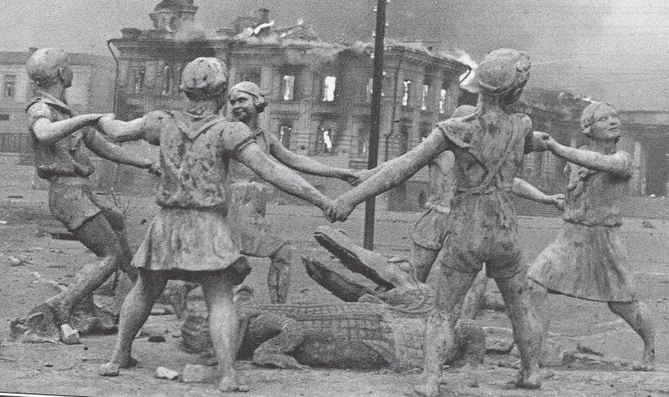 but with an awe-inspiring or monstrous THING in place of the alligator. Now that would be an award that we can all be disturbed by. And isn't that what's most important?